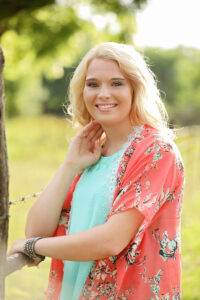 COFFEYVILLE, KANS. (August 19, 2019) – A Labette County High School graduate has won a scholarship through the Inter-State Fair in Coffeyville.

As part of the Junior Advisory Board (JAB), Brittany Monroe, Edna, Kan., is the recipient of the 2019 JAB scholarship.

In high school, Monroe was football manager for four years, baseball manager for three years, and involved in K Club, Letterman’s Club, FFA, Math Club, Art Club, Health Careers, and was a member of the National Honor Society. She was on the honor roll all four years of her high school career.

Monroe was on the JAB for three years. As a member of the JAB for the Inter-State Fair, she, along with the other nine members, volunteered her time at monthly meetings, gave input to the fair board, and helped at the event by selling programs, making sure sponsor VIP food and beverage needs were taken care of, and helping with the annual spring livestock show.

Being a part of the JAB was helpful to her, she believes. “It was hard for me at first,” she said, “because I’m not very talkative and I don’t get out of my comfort zone to talk to people.” As a JAB member, she approached potential sponsors and had to work with the other board members, which helped her become more comfortable in talking to people she didn’t know well.

She recommends JAB membership to others. “Not only did it help my communication skills, it taught me how to work with other people. You learn that things aren’t always going to go your way, and you won’t always agree with the other person. You have to find ways to say, ‘let’s try and see if this works.’”

This fall, Monroe will attend Labette Community College. She enters college with 30 college credit hours and will graduate in May of next year with a general associate degree. After that, she plans on continuing her education in the physical therapist assistant program.

Monroe was also part of two other junior advisory boards: the Eastern Kansas Swine Show Series, and the JAB for the Labette County Fair.

She is the granddaughter of Regan Monroe and the daughter of Tara and John Foster and James Monroe.

She has six younger siblings: sisters Sydney, Sophia and Sabrina Foster, Bailey and Morgan Monroe, and a brother, Gavin Foster.

Applications are being accepted for the 2020 JAB from high school candidates from the following counties: Montgomery, Labette and Chautauqua, Kansas, and Craig, Nowata and Washington, Oklahoma.

Deadline for the application is September 27, 2019. For more information or an application, visit www.FairandRodeo.com or call Jamie Carr at 620.820.3717.