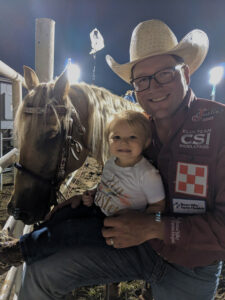 COFFEYVILLE, KAN. (August 16, 2019) –  The last team in the team roping bested the entire field of ropers and came up with the win during the final night of the Inter-State Rodeo in Coffeyville on August 16.

Coleman Proctor, Pryor, Okla., headed for Brye Crites, Afton, Okla., and the two turned in a time of 4.9 seconds to win first place, one-tenth of a second faster than the second place team, Curry Kirchner, Ames, Iowa and Daniel Reed, of Ada, Okla., who had a time of 5.0 seconds.

It was the first time for the two to rope together at a rodeo. They have roped together at jackpots, but winning their first rodeo together was a good start to their partnership. “Brye and I have been friends for a long time,” Proctor said. “I’ve heeled for him, he’s heeled for me, at jackpots. This was kind of fun, going out with a win like that, and getting it started together.”

Proctor was complimentary of his heeler. “I didn’t throw a very good head loop,” he said. “Brye did an outstanding job. He heeled the fire out of that sucker and was fast enough.”

The four-time Wrangler National Finals Rodeo (WNFR) qualifier has spent nearly all of the year heading for Ryan Motes. But when Proctor’s wife Stephanie got closer to her due date for their second child Caymbree, who was born in early August, Proctor decided to forgo the big rodeos in the Northwest in August and September and rodeo closer to home.

So while Motes is roping in the northwestern part of the U.S. with Paul David Tierney of Oklahoma City, Proctor is roping with Crites. Proctor and Motes will join forces again four more times this year: in San Juan Capistrano, Calif., Puyallup, Wash., and Ft. Madison, Iowa, before they head off to the Wrangler National Finals Rodeo in December.

He’s enjoyed his time closer to home. Elder daughter Stella, who is 22 months old, has gone with her daddy to a few rodeos.

So far this year Proctor has won over $95,000, trailing the number one man, Clay Smith, by about $26,000. Smith “has roped phenomenal this year. I’m just trying to keep within a go-round of him when we get to the Finals, so I have a legitimate chance (at a world title.)”

An Australian man won the saddle bronc riding at the Inter-State Rodeo.

The 22-year-old is a student at Panhandle State University in Goodwell, Okla.

He grew up in Australia and spent two summers in Canada spending time with other bronc riders. Those cowboys were college students, competing at Panhandle State. “I said, heck, if you guys are going, I’m going too.”

He earned himself a rodeo scholarship, and will start his third year of college this fall. He’s also done well at the collegiate level, winning fourth in the nation in the National Inter-Collegiate Rodeo Association this year.

Thatcher is working towards an ag business degree but plans on rodeoing full time after graduation. “One day down the road, when rodeo’s all finished, I’ll try and use my brain to do something smart, I guess,” he laughed.

Thatcher follows in his dad’s footsteps.

Mark Thatcher, his father, spent three years in the U.S. in the late 1980s, rodeoing in the same event as his son. “He wasn’t a big name,” Cooper said, “but he was a really good bronc rider when he was younger.”

Inter-State Fair Royalty was crowned during the rodeo on August 16.

Winning the title of Little Miss was Crosslyn Mooney, Welch, Okla. She is the daughter of Brian and B.J. Mooney.

Laray Taylor, Nowata, Okla., was crowned Inter-State Fair Princess. She is a student at Oklahoma Union High School and the daughter of Kristi Taylor.

The Inter-State Fair and Rodeo Queen is Nell Kreder, the daughter of Shann Kreder and a resident of Ramona, Okla.

For complete results from all fair activities, visit the website at FairandRodeo.com.

** All results are unofficial.