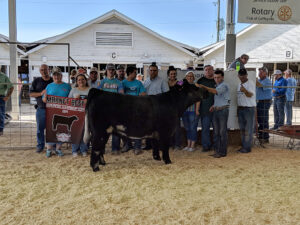 Coffeyville, Kan. (August 15, 2019) – Keaton Gilman is going to have to run extra in high school football practice next week, but he doesn’t mind.

The Miami, Okla. youth has missed five days of practice for Vinita High School, but he has a good reason.

His steer, a 1,365 lb. crossbred, won Grand Champion Steer on August 15 at the Inter-State Fair in Coffeyville.

And while he was at the fair, football practice, and school, started without him.

Gilman’s steer is named McGregor, after the MMA fighter Conor McGregor. He got the steer in March and has spent nearly every night, seven nights a week, in the barn getting the animal ready for the show.

“It’s work,” he said. “We’d start about six p.m., and we wouldn’t leave the barn till about ten p.m.,” as he and his family exercised and washed the steer, working on showmanship. It gave the teenager very little social life, but he didn’t mind. “I’d much rather be doing this.”

He loves everything there is about showing livestock. “All of it, I love all of it,” he said. “The adrenaline rush when the judge comes out there (in the show ring) and slaps that steer for grand (champion), it’s just awesome. To know all of that hard work you’ve put in that entire time, working in the barn until 10, finally paid off. It’s just amazing.”

He also showed two pigs and a heifer at the fair, and has been showing since he was nine years old.

As a junior in high school this fall, Gilman will play football, wrestle, and be a member of his school’s FFA chapter. After high school graduation, his plans are to go to school to be a lineman.

And now that the hard work is mostly over with his livestock, Gilman can enjoy the fair. He loves the rides, including the Freak-Out ride, the most adventurous ride at the fair. He also loves the funnel cakes. He’s had two so far, with plans for a third one today.

“It doesn’t seem like the fair till you’ve eaten one,” he said.

He is the son of Bobby and Becky Gilman, and has an older sister, Madison.

The judge of the beef shows was Dr. Blake Bloomberg, Stillwater, Okla. 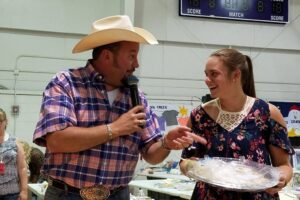 Baking is alive and well at the Inter-State Fair in[...] 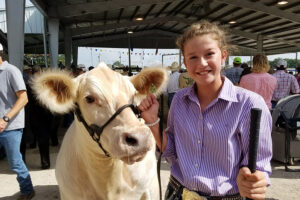 Grand champion market steer at the 2017 Inter-State Fair in[...]