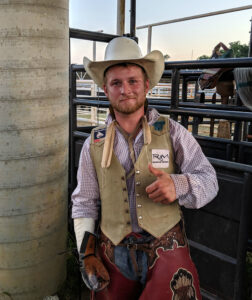 Tim Murphy, who is a student at Hill College in Hillsboro, Texas, scored 82 points on New Frontier Rodeo’s Elvis to take the lead after the first night of rodeo.

It wasn’t smooth going to start with. “They bucked me off for a real long time, and finally, I got tired of that, changed things up a little bit, and here I am.”

Murphy is working towards a degree in welding and will graduate in May of next year. He rodeos collegiately for Hill College.

Chance Merrill, who moved from Colorado to Coffeyville three years ago, is currently sitting second at the rodeo with a score of 80 points.

In the barrel racing, Jamie Chaffin, Burwell, Neb., is in the lead after the first night of rodeo.

Chaffin rides a ten-year-old mare, JKR Dashs Fast Star, “Bernadette,” a horse she bought from her uncle three years ago.

Bernadette, who is named after the character in the television show “The Big Bang Theory,” ran well tonight. “She really ran,” Chaffin said, “really hard. My first barrel was just perfect.” The cowgirl knew how to direct her mare around the second barrel, knowing that seeing the crowd behind the barrel might affect the horse. “I knew I had to drive her into that second barrel. She listened to me and let me do it. Running towards a crowd like that, she tends to want to rate (slow down for the turn around the barrel) too soon. I had to make sure I was on my game tonight.”

Chaffin is ranked second in the Prairie Circuit, pro rodeo’s designation of rodeos in Kansas, Oklahoma and Nebraska, headed for her first ever Prairie Circuit Finals Rodeo in Duncan, Okla. in October.

“Till I bought her,” Chaffin said, “I hadn’t pro rodeoed in several years. I never had a horse good enough to come to the pro rodeos.”

Chaffin is a graduate of the University of Nebraska-Lincoln and Northwestern Health Sciences University, where she earned her chiropractic degree.

The schedule for the Inter-State Fair on August 16 includes the junior market livestock sale at 4:30 pm, the carnival from 6 pm to 12 midnight, and the final performance of the rodeo. Tickets for the rodeo are $15 and can be purchased online at www.FairandRodeo.com, at the fair office, and at the gate. For more information and a complete schedule, visit the website at www.fairandrodeo.com.

** All results are unofficial. 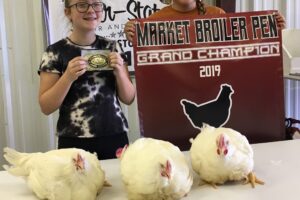 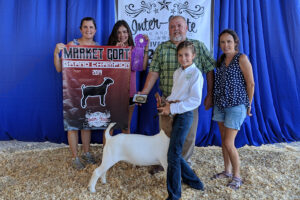 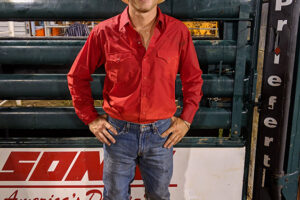